Meaning of Triangular Business in English 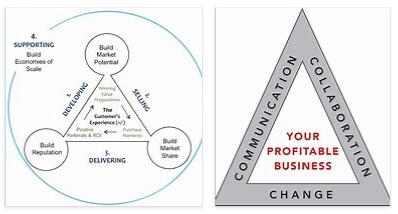 A triangular transaction exists when three entrepreneurs, who have their place of business in different countries of the EU, conclude sales transactions for a certain trade item. It is a chain transaction that is subject to simplified regulations with regard to the payment of sales tax.

What is a triangle deal?

The properties for a triangular transaction are based on the provisions of Section 25b of the Sales Tax Act (UStG). The law defines an intra-Community triangular transaction as follows. When three people, each of whom are individually liable for sales tax, come from different EU countries and conclude a transaction on the same item. Of the three participants, at least the first two must be entrepreneurs and the last only half-entrepreneurs. The object in question is transported from the first supplier to the last and actual recipient as part of a sales transaction. In this transaction, the item of trade moves from one state of the European Union to another.

A further prerequisite is that the middle of the three entrepreneurs in the trade series is not subject to sales tax in the state into which the item is to be delivered. The middle one uses a sales tax identification number vis-à-vis the other partners , which, however, must not come from the state into which the item of trade is to end up. The final and final recipient of this series of trades uses the VAT identification number of the state to which the item arrives. When an invoice is issued by the middle party to the triangular transaction, the item of trade is deemed to be taxed. The tax on a delivery from the middle trader to the last party is to be paid by the last party as the customer.

Requirements for an intra-Community triangular transaction according to the UStG

According to § 25b UstG, the following conditions must be met for a triangular transaction. Three entrepreneurs involved (the supplier and a first and second buyer) conclude a transaction in which the delivery item is delivered directly from the supplier to the second buyer. All three companies are based in different EU member states. The trade item is delivered from one member state to another and, when the trade is carried out, either by the supplier himself or by the first buyer to the end buyer.

Since the business basically consists of three different entrepreneurs, this leads to an intra-community acquisition for the first buyerwithin the associated country of destination. The consequence would be the occurrence of a taxable domestic delivery for the first customer. As a consequence of the resulting tax liability, the first trader would have to submit his sales tax return in another country within the framework of European sales tax law. In the case of a triangular transaction, the acquisition of the item becomes taxable in another EU member state. However, the tax liability for the corresponding delivery is transferred directly to the second buyer and recipient. The first purchaser does not become taxable and does not have to register for tax in the country of destination.

How does a triangular deal work?

Example: Entrepreneur A based in Germany orders an item from retailer B based in France. B orders the object of purchase from producer C, who is based in Spain. B is therefore the first buyer or purchaser. C has the function of the supplier and is instructed by B to send the item directly to customer A. The simplification regulation in § 25b UstG stipulates that none of the entrepreneurs involved in the triangular transaction are forced to register to pay sales tax in another EU member state. Without this simplification, the French dealer B would have to be registered in the country of destination Germany with regard to a sales tax to be paid by him. The consequence for him would be

In the aforementioned example of an intra-Community triangular transaction, the tax liability of the first buyer B is transferred to the last entrepreneur C. It is the reverse charge procedure . In the EU member state of the first customer B, no taxation is therefore carried out. A VAT registration of B in the country of destination Germany is also not necessary. Without the simplification rule applied here, the first buyer B in the country of destination Germany would have to acquire an item within the Community with input tax deductionas well as report a domestic delivery that is also taxable. In the event that the first customer B does not have a sales tax identification number (USt-IdNr.) For Germany, he would have to make an additional intra-Community acquisition in the country whose Ust-IdentNr. he uses, assert.

The companies involved must be registered in three different EU member states. If two companies with the USt-IdNr. of the same member state, it is not a triangular deal. If the transport is carried out by the recipient, i.e. the last final customer, or if the customer has picked it up, there is only a simple chain transaction . If more than three entrepreneurs are involved in the chain transaction, this simplification rule only applies in certain cases.

Tax consequences of the simplification rule

In the case of an intra-Community triangular transaction, the sales tax of the middle party (in the above example B) is only passed on to the last buyer A if certain requirements are met in accordance with Section 25b (2) of the UstG. The delivery of the middle party B to the last customer A must have been preceded by an intra-Community delivery . In addition, the middle buyer B must not be based in the same member state in which the transport of the commercial item ends. The middle party to the business uses the same VAT ID number for the first supplier C and the final customer A. This was granted to him by another member state of the EU, such as the state in which the use of the commercial item ends.

According to Section 25b.1 Paragraph 7 of the Sales Tax Application Decree (UstAE), if the tax is transferred to the last party A involved in the triangular transaction, the acquisition by buyer B according to Section 25b Paragraph 3 UStG is deemed to be taxed. This means that the taxation of the purchase by the first buyer B also applies to the country in which its final use ends (Germany). At the same time, it applies to the assessment of taxation in the member state in which the first customer B occurs (cf. § 3 d UStG). This simplification in the context of an intra-Community triangular transaction means that the middle party B does not have to be taxed in the country of destination (here: Germany). Rather, the tax that arises from the delivery of the item to party A in Germany is paid,

If the tax liability according to § 25b Abs. 2 UstG is transferred to the final buyer involved in the triangular transaction, the consideration for the calculation of the tax liability applies as consideration. It is the net amount without sales tax. The sales tax is to be added to this sum. If an intra-community triangular transaction is carried out, the delivery of the commercial item by the first buyer (B) to the last and final buyer (A) is owed by the latter (B) (cf. § 25b (2) UstG). The final recipient of the item (A) can use this tax as input taxpull off. However, he may only purchase the property for his own company and use it to realize his own sales, which do not exclude input tax deduction (cf. § 25b (5) UstG). The execution of an input tax deduction is therefore permissible without separate disclosure in an invoice.

Advantages of the triangle business

The advantages of the triangular transaction are that there is no registration of the intermediary B and the last buyer A, i.e. the purchaser in Germany, assumes the entire tax liability, which he in turn can get back via an input tax deduction. The intra-community delivery of the item by buyer A is therefore fully taxed. However, A is obliged to list the acquisition of the commercial goods in its declaration of VAT and in its advance VAT return. It is also necessary that dealer B makes a reference to the intra-Community triangular transaction. He does not have to show the sales tax separately in his invoice.

According to Section 25b (2) No. 3 UstG, the prerequisite for the transfer of the tax liability is that the first customer issues an invoice to the last customer that does not show the tax separately ( Section 14 (4 ) UstG ). In addition to the actual invoicing, the following information must be provided:

The customer A must indicate by means of a note on the invoice that he has become the final buyer of the item. At the same time, he must be informed that he is the last recipient of a triangular transaction and that the tax liability to be paid is completely transferred to him (Section 25b.1 Paragraph 8 UStAE).

Triangular transaction with reference to a third country

Example: A German entrepreneur (A) orders a commodity or a machine from a dealer in Switzerland (here: B). The Swiss dealer orders the machine from the manufacturer in Spain (C), who, as instructed, delivers the item or machine directly to German entrepreneur A. The first buyer from Switzerland (B) enters this business with a German or an EU VAT identification number. In this example, too, the basic requirements for a triangular transaction are met. Again, three different entrepreneurs are involved in the business, who in turn have to be registered in three different member states. However, the fact that the middle dealer (B) is not based in a country of the European Union is not harmful here.

However, Swiss entrepreneur B must register in relation to his sales tax either in Germany or in another EU member state. He therefore has a corresponding German or other sales tax identification number from the EU. He is involved in the triangular deal like a company or dealer from an EU country. The simplification regulation of the triangular transaction means that the tax liability of the first buyer B is again transferred to the final buyer of the commodity (A) through the reverse charge procedure. In the country of the first customer B, i.e. Switzerland, there is no taxation. The intra-Community acquisition within the framework of the triangular transaction is considered to be taxed.